The historical Buddha Shakyamuni taught for 45 years after he reached enlightenment. People were inspired by the Buddha's radiant qualities and profound teachings (Skt: Dharma). However, it was the student's motivation and view that decided which teachings they received and consequently the Buddhist tradition they followed.

The Dorje & Bell represent the inseparability of Wisdom and Compassion. 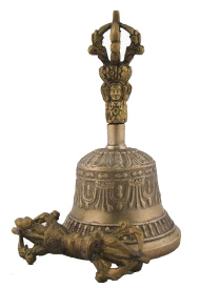 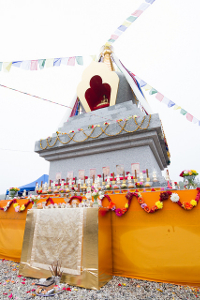 One of the eight different types of Tibetan Stupa, the Enlightenment Stupa symbolizes Buddha's enlightenment.

For those who wanted to stop their suffering and avoid disturbing situations, the main teachings received were on karma and the eightfold path. These teachings became the foundation of the Theravada tradition of Buddhism which is mainly practiced by the monastic community. Theravada Buddhism is sometimes referred to as "Southern Buddhism" on account of the fact that it is prevalent in Sri Lanka, Cambodia and Thailand. The translation of the word Theravada is "way or doctrine of the elders" - with the elders reference referring to monks.

For those that saw the opportunity for both themselves and all others to have freedom from suffering the Buddha gave additional teachings on wisdom and compassion. These teachings became the foundation for the Mahayana tradition of Buddhism. Mahayana means "great way" or "greater vehicle" and several different schools fall under this tradition of Buddhism. This is the type of Buddhism commonly found in Japan, China, Indonesia, Korea and Mongolia and Tibet.

The third tradition is known as Vajrayana which simply translated means "Diamond Way" These students also saw the opportunity for both themselves and all others to have freedom from suffering. However, it is their confidence that Buddha qualities are already inherent in everyone, and one just needs to realise it -- it is for this reason that additional teachings on mind were given to them by the Buddha. These teachings are known as "Mahamudra" or "The Great Seal" which can fully awaken mind's full potential and establish its enlightened nature. Vajrayana Buddhism originated in India and is predominant in Nepal, Bhutan, Mongolia and Tibet. Several centuries ago Vajrayana was sometimes referred to as Mantrayana on account of the practitioner using mantras in order to help focus the mind and maintain awareness whilst in meditation.

There are four main schools of Buddhism in Tibet. Nyingma, Kagyu, Sakya and Gelug. All four schools have their own teachers and principal lineage holders who are responsible for the spiritual guidance of their own school. In the case of the Karma Kagyu it is the Karmapa, currently His Holiness Thaye Dorje the 17th Karmapa.

Diamond Way Buddhism is part of the Karma Kagyu school of Tibetan Buddhism and follow the teachings of the Vajrayana tradition.