The Kagyu school of Tibetan Buddhism is the largest of the four schools of Vajrayana Buddhism in Tibet. Within the Kagyu school, there are several schools. The largest and most widely practiced of these schools is known as the "Karma Kagyu".

The Buddha taught by speaking directly to his students, not by relying on texts or written instructions. It was his early disciples that recorded his teachings and were thus able to preserve the Buddha's words exactly as the Buddha had spoken them. This oral transmission method has been maintained throughout the Karma Kagyu lineage to the extent that the lineage is often referred to as a lineage of direct oral transmission. In subsequent years commentaries were written on his teachings by the highest Buddhist masters, explaining many of the Buddha's profound words whilst maintaining the pure form of the teaching. 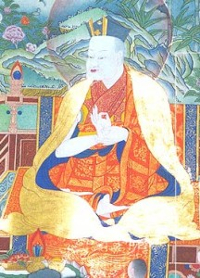 Dusum Khyenpa, the founder of the Karma Kagyu tradition of Tibetan Buddhism

The founder of the Karma Kagyu school was Dusum Khyenpa, the first Karmapa, who was the principal disciple of Gampopa, the great Buddhist Master who had received the full transmission of the Kagyu teachings from Milarepa. A brief account of the life stories of these remarkable lineage masters who carried the complete Kagyu transmission can be found below.

Students of the Karma Kagyu school have been following the spiritual guidance of the Karmapas since Gampopa: a period of over 900 years.

Karma Kagyu Buddhism in the West

The geographical spread of Karma Kagyu Buddhism, as with the other schools of Tibetan Buddhism, is a result of the 1959 Chinese incursion and subsequent occupation of Tibet. Many of the Buddhist high Lamas were forced to leave their homeland, the majority finding refuge in Northern India whilst some found a safe haven in Nepal and Bhutan.

Prior to this, the Tibetan Buddhist teachings were relatively unknown to the outside world, isolated for centuries behind the natural protective barriers of the Himalayas. Now, the teachings of Tibetan Buddhism have become more accessible. Teachers started travelling to other countries and over the last 50 years there has been a rapid growth of Karma Kagyu and Tibetan Buddhism around the world. The current 17th Karmapa, His Holiness Thaye Dorje, is now responsible for over 900 Buddhist monasteries and centres around the world.

Probably the most significant evidence of this growth is Diamond Way Buddhism. The main people responsible for this development have been: H.H. the 16th Karmapa Rigpe Dorje, Ole Nydahl and his wife Hannah. More information regarding this extraordinary story can be found here.